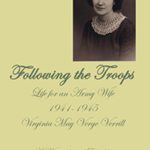 The National Guard was activated after the attack on Pearl Harbor. Tom’s division, the 43rd, was to be stationed at Camp Blanding just outside of St. Augustine, Florida.

On the way down, Tom made out a training plan for the troops when they arrived at Camp. He was the only junior officer to have done this. He earned his First Lieutenant bars and was sent to Fort Benning for further schooling.

Tom wrote that he wanted us to come down to be near him. So on April 18th, we set out for Florida. The night before we had a bad snowstorm. We were already to go, so we started off anyway.

Find a Book or Author